November, 2019 – CUPE 409 members are invited to a Community Meeting to provide feedback on BC’s Framework for Accessibility Legislation, taking place on Nov. 25 in Burnaby – RSVP required. Find out more here. 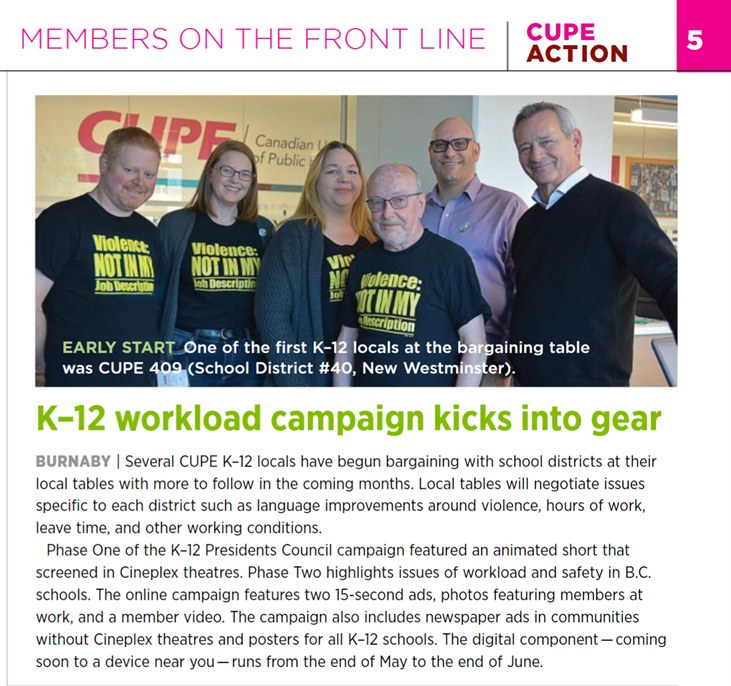 May, 2019 – Marsolais criticizes BC Green’s Jonina Campbell in letter to the editor and advises “it’s not too late” to assist BC workers. Read more here.

April 28 is the National Day of Mourning

November, 2018 – CUPE BC endorses Laird Cronk and Sussanne Skidmore for BC Federation of Labour leadership

March, 2018 – Read CUPE’s Global Justice newsletter that provides insight into the work CUPE is doing to contribute to the struggle for global justice and to build effective strategies to defend workers’ rights, human rights and the quality of public services in our communities around the globe. Read more here.

March, 2018 – CUPE 409 recommends BC FORUM – the BC Federation of Retired Union Members. Find out more here.

May, 2017 – Spring 2017 issue of CUPE’s Tabletalk magazine available for download

May, 2017 – We voted for change—now what will it look like? By Paul Faoro, CUPE BC President

February, 2017 – Message from Paul Faoro, CUPE BC President, on the Children’s Representative’s report on the death of young Alex Gervais. Click here to read.

December, 2016 – Burnaby South MP Kennedy Stewart invites you to view the video: Don’t let the Liberals get away with silencing opposition to the Kinder Morgan pipeline. Click here to view.

December, 2016 – From the Globe & Mail: How do we heal trauma suffered by native communities?

October 6, 2016 – The 2016/2017 CUPE 409 Schedule of Meetings is now available for download for members. Meetings have also been posted on the website calendar. Read more here.

August 10, 2016 – BCNU leaders locked out staff and provoked a strike

May 12, 2016 – The Province newspaper, March, 2007: “You don’t have to pay for private school to get your children ahead” writes Christy Clark. Read article here.

May 5, 2016 – CUPE member Dee Beattie announces candidacy to run in by-election for SD40 School Board in New Westminster – read the article from the New Westminster Record newspaper here.

May 3, 2016 – Photos from recent CUPE events including Day of Mourning and 2016 CUPE BC Convention in Victoria.

April 27, 2016 – CUPE BC to commemorate Day of Mourning in Victoria. Read details here, including when and where.

April 20, 2016 – CUPE Local 409 is pleased to announce the 2016 Bursary applications are now available. Please note the deadline for submissions is Friday, May 13, 2016. Read more and download the application forms here.

September 8, 2015 – Having fun at this year’s Labour Day picnic in Burnaby.

May 27, 2015 – The Canadian Labour Congress presents the “Time for Change” tour in New Westminster on Monday, June 8th at 6:30 pm at the Anvil Centre. Everyone welcome! Read more here.