Delegates to the 2015 national convention have elected Mark Hancock as their new national president.
Hancock thanked members for their support. “To all of our members in every sector, I am so honoured to have the opportunity to be your national president and to work with all of you.”
Hancock saluted Fred Hahn for his candidacy and his ongoing leadership in CUPE.
A CUPE member since 1984, Hancock has been president of CUPE BC since 2013 and served on the CUPE BC executive board for 12 years. He was the president of CUPE 498, Port Coquitlam Municipal Employees, for 15 years. 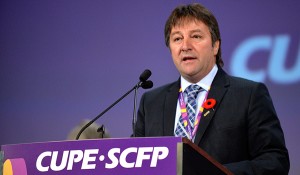 Charles Fleury was re-elected by acclamation to a third term as national secretary-treasurer.
“I want to thank you for this privilege to serve you for another term. I’m sure together we’ll be able to take on all the challenges we face. And I will make sure that we have the financial resources to succeed,” said Fleury.

Convention delegates paid tribute to Paul Moist, recognizing his 40 years as a CUPE member, activist, staff member and leader.
Charles Fleury, national secretary-treasurer, led off the tribute by highlighting Moist’s many roles with CUPE over the past four decades.
Video tributes included long time friend and executive assistant Pam Beattie, activist extraordinaire Maude Barlow, and close friend and warrior for global justice, Stephen Lewis.
In the convention hall, Barry O’Neil, former president of CUPE BC, praised Moist’s compassion for workers, and his leadership in building CUPE into a progressive union.
“On behalf of my family to all delegates, thank you for taking such great care of our dad, but now is our time to take him back,” said his daughter, Kelly Moist, speaking on behalf of the Moist family.

Yussuff calls on CUPE members to hold Liberals to account 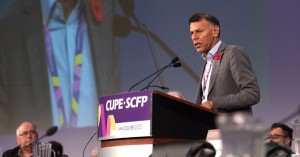 The next four years present an opportunity to build the Canada we want, Canadian Labour Congress President Hassan Yussuff told delegates.
“The work you did and our movement did across the country was absolutely stellar,” he said. “We had to defeat the Stephen Harper government and it was such a pleasure to watch his sorry ass walk off that stage.”
Yussuff called on CUPE members to be united. “The enemies of this organization are not in this room,” he said. “When you leave, leave as 600,000-plus united, and tell the employers: You attack one of us, you attack all of us.” 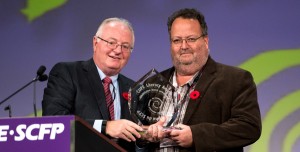 This year’s CUPE Literacy Award was presented to Danny Cavanagh, outgoing regional vice president for CUPE Nova Scotia and a member of CUPE 734. Cavanagh has been a champion for literacy as a union issue.
Cavanagh said literacy is a “golden key” that allows workers to open doors to opportunities that would otherwise remain closed to them.